Understanding relationships between sets is an important analysis task. The major challenge in this context is the combinatorial explosion of the number of set intersections if the number of sets exceeds a trivial threshold. The most common set visualization approach – Venn Diagrams – doesn’t scale beyond three or four sets. UpSet, in contrast, is well suited for the quantitative analysis of data with more than three sets. 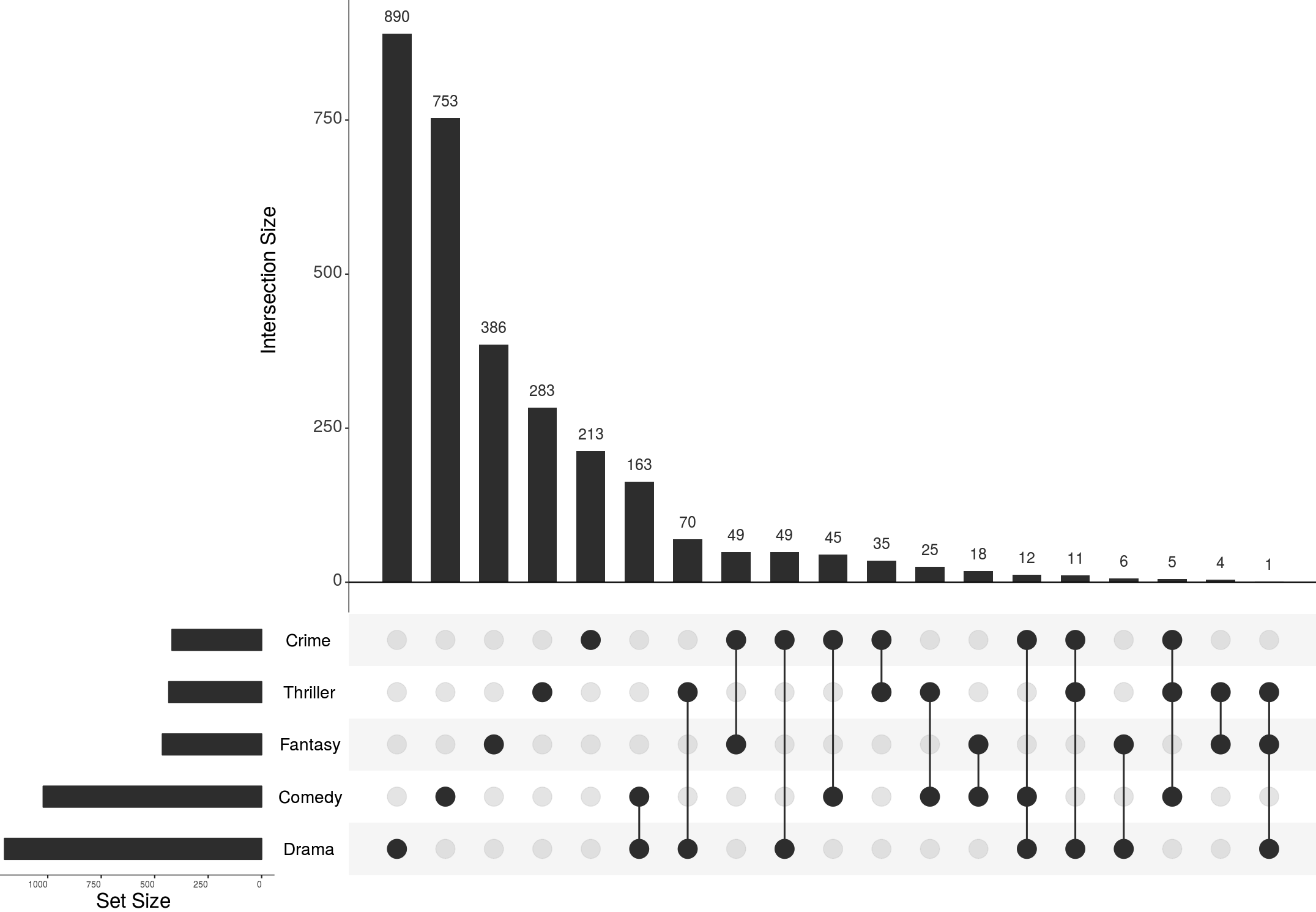 If you created an UpSet figure with UpSetR, please also cite the UpSetR paper:
Jake R. Conway, Alexander Lex, Nils Gehlenborg. UpSetR: An R Package For The Visualization Of Intersecting Sets And Their Properties Bioinformatics, 33(18): 2938-2940, doi:10.1093/bioinformatics/btx364, 2017.

When should you use UpSet?

UpSet works best for set data with more than three and less than about 30 sets. For fewer than 4 sets, an area-proportional Venn diagram might be the better choice, as they are immediately familiar to everyone.

UpSet is well suited for analyzing distributions and properties of many items. Items are abstracted away as “counts”, though attributes of the items can be visualized in integrated or adjacenct plots. If you want to see individual items in your set, you should probably go with a Euler Diagram.

Also take a look at the Nature Methods Points of View article discussing these trade-offs.

This layout is great because we can plot the size of the intersections (the “cardinality”) as bar charts right next ot the matrix, as you can see in the following example:

This makes the size of intersections easy to compare.

The matrix is also very useful because it can be sorted in various ways. A common way is to sort by the cardinality (size), as shown in the following figure, but it’s also possible to sort by degree, or sets, or any other desired sorting.

These are the basiscs of UpSet! There’s a lot more than you can do with UpSet plots, such as visualize attributes of the intersections, or group intersections. Look at the advanced page for details.

UpSet Plots are generally easy to read. There is one important caveat though: you should be careful about interpreting data where the size of the sets is very different. Look at the following example: 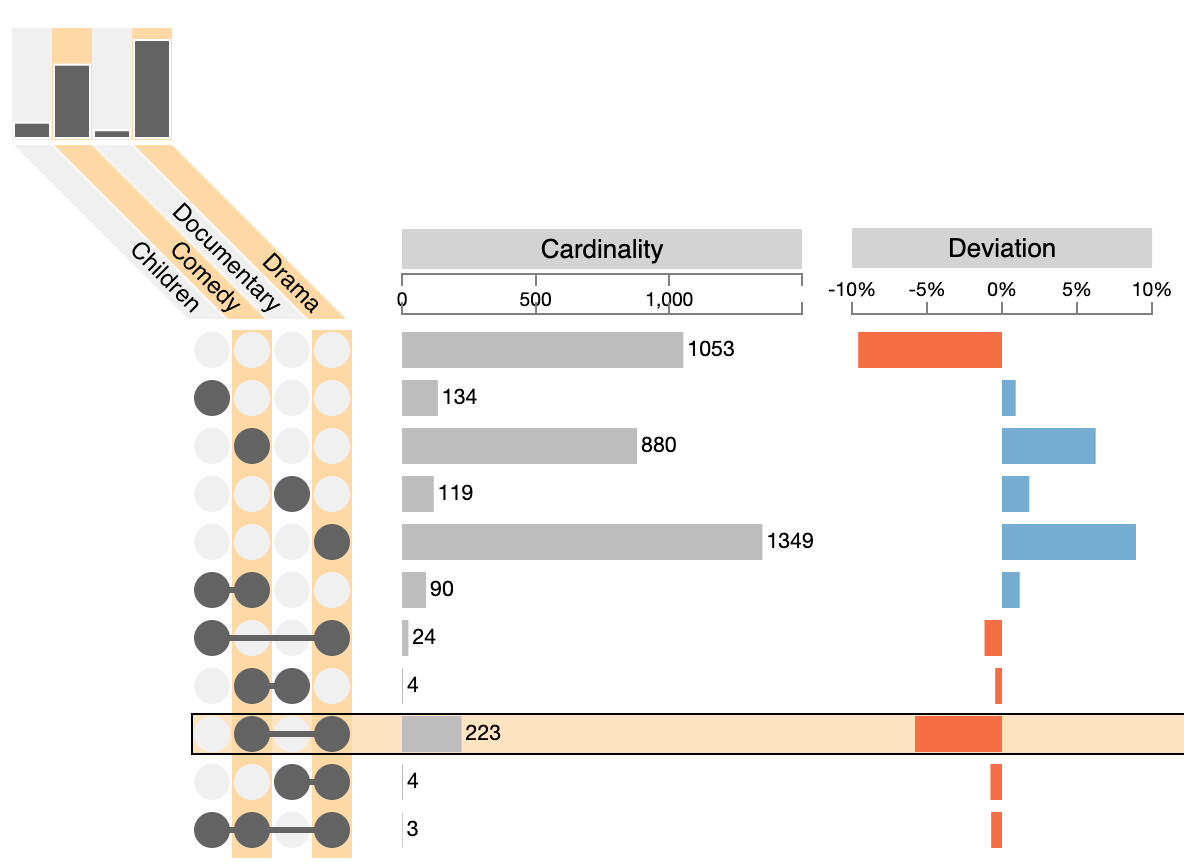 Here’ we’re looking at movie genres, and it looks like the 2-set combination of “Drama” and “Comedy” is the largest two-set intersection. While this is a correct obervation it seems odd: dramas and comedy don’t seem to go together all that well. What we’re seeing here is an effect of the large size of the “Drama” and “Comedy” sets. Compared to the “Children“ and “Documentary” sets, those two sets are huge. To understand this, it’s important to also look at the set sizes, and hence no upset plot should omit the visualization of set sizes. The above example shows another metric that can be used to interprete this: the “Deviation” (orange and blue bars) that indicate how much an intersection deviates from the expected size if we assumed that set membership were random. We see that the comedy-drama intersection is actually much smaller than it should be if the data were random.

Venn diagrams are not suitable to visualize intersections of more than three or four sets. The figure below shows an example of a six-set venn diagram published in Nature that shows the relationship between the banana’s genome and the genome of five other species by visualizing which genes are shared between the plant species. 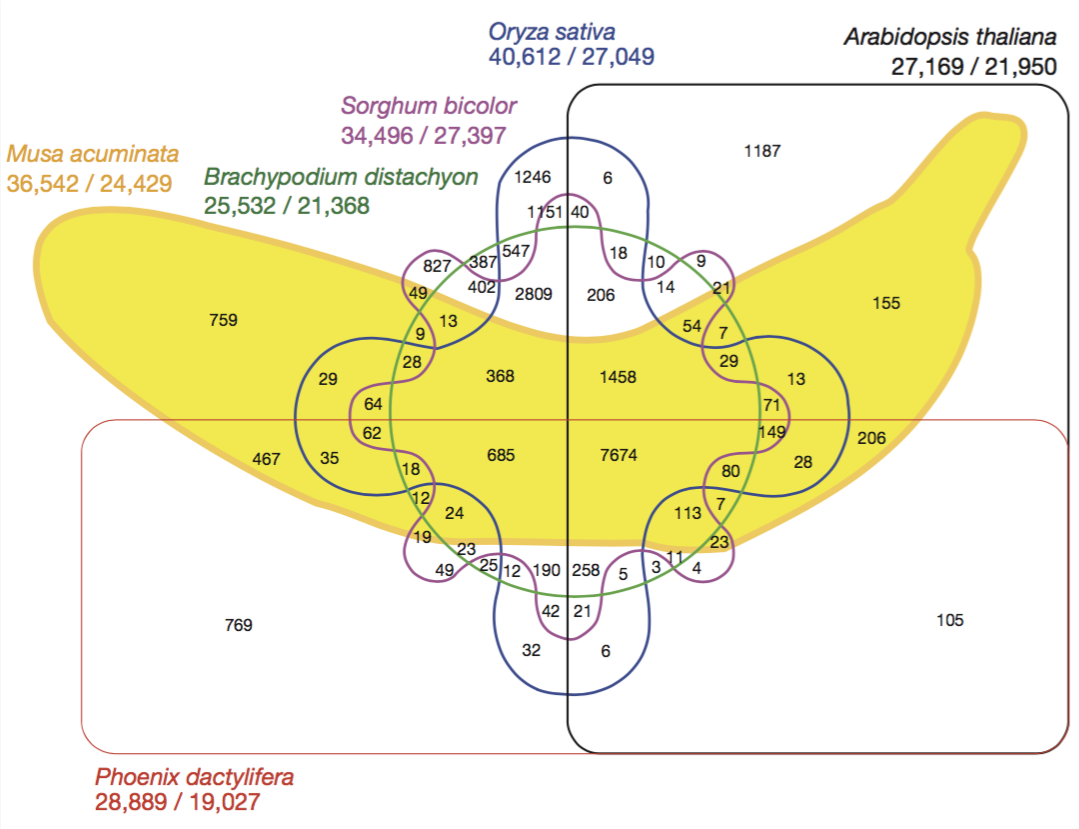 While this figure looks fun, it is not a useful visualization. Try to extract any information from it. It’s really hard to trace which intersection involves which sets. It’s not obvious which is the biggest intersection from the visualization – you have to read the labels one by one.

You might ask, how does the banana venn diagram look in UpSet? Here you go: 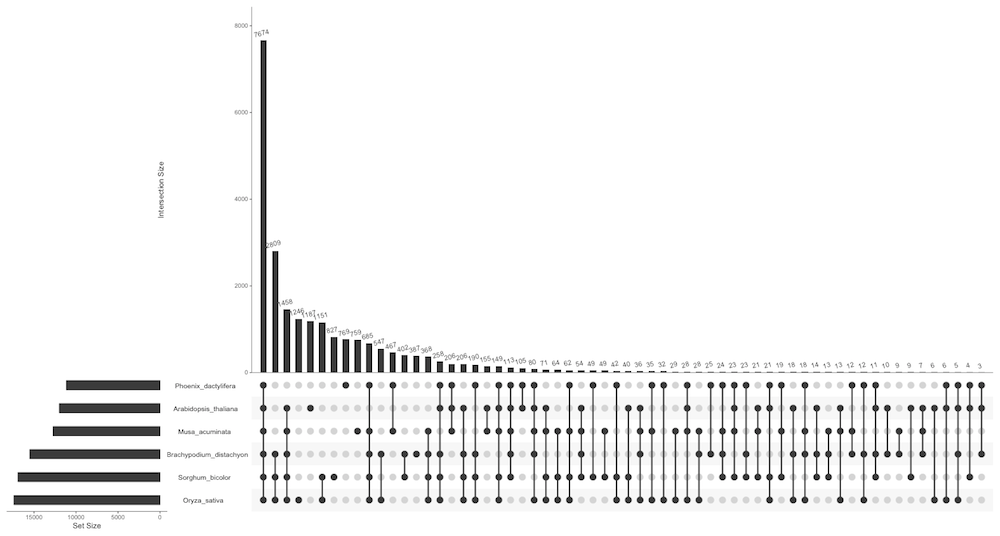 It is a little hard to read because the figure is rather small. But we can simply remove the small intersections, and we get a nice plot that shows us the main features of the data: 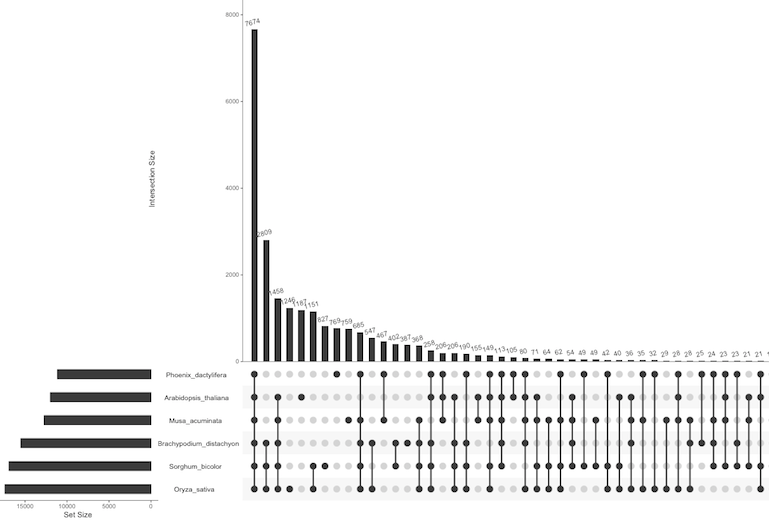 Notice how easy it is to see trends: the vast majority of genes is shared between all plants, as highlighted in the next figure: 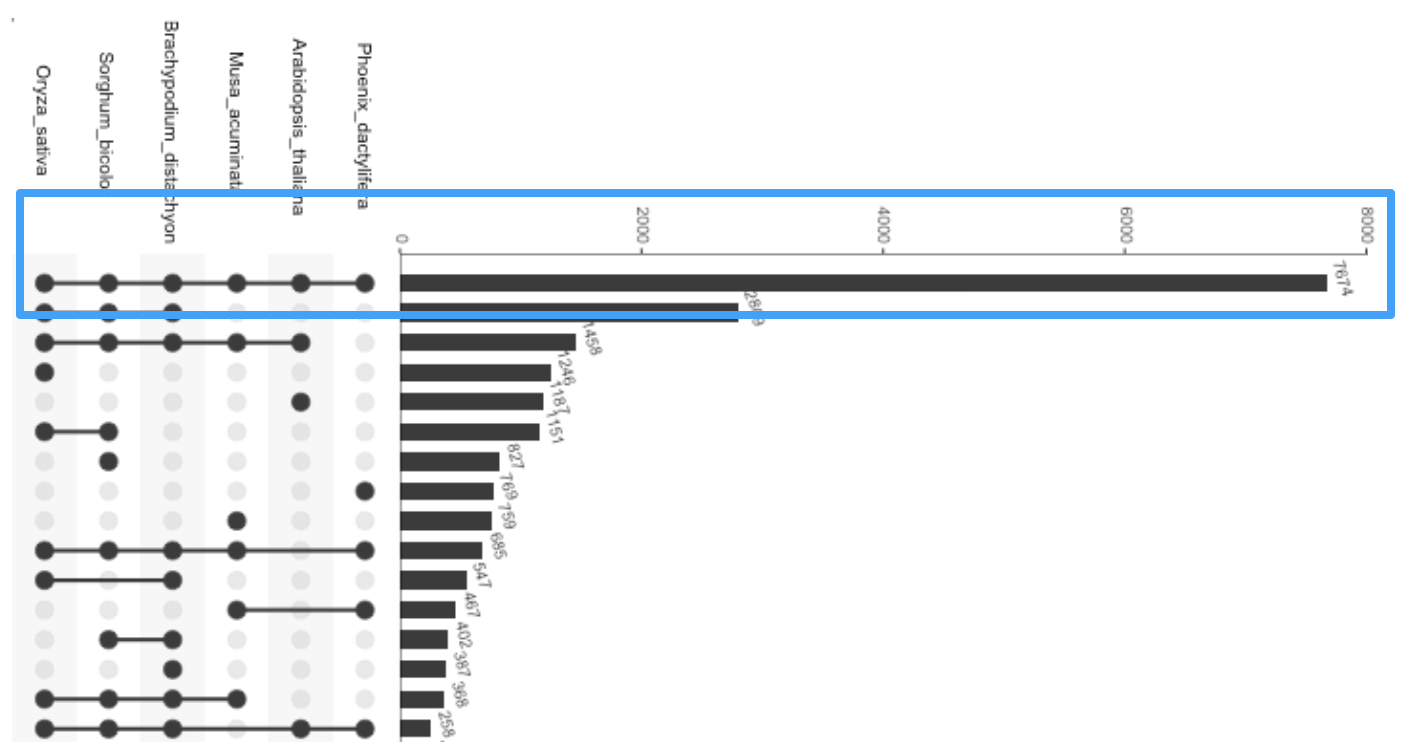 Similarily, the first three species (Oryza_sativa, Sorghum_bicolor, and Brachypodium_distachyon) seem to be highly related, as all of them are part of the top-three intersections. In contrast, the sixth species (Phoenix dactylifera) seems to be most different from the others, as it only again is part of the sixth-largest intersection. 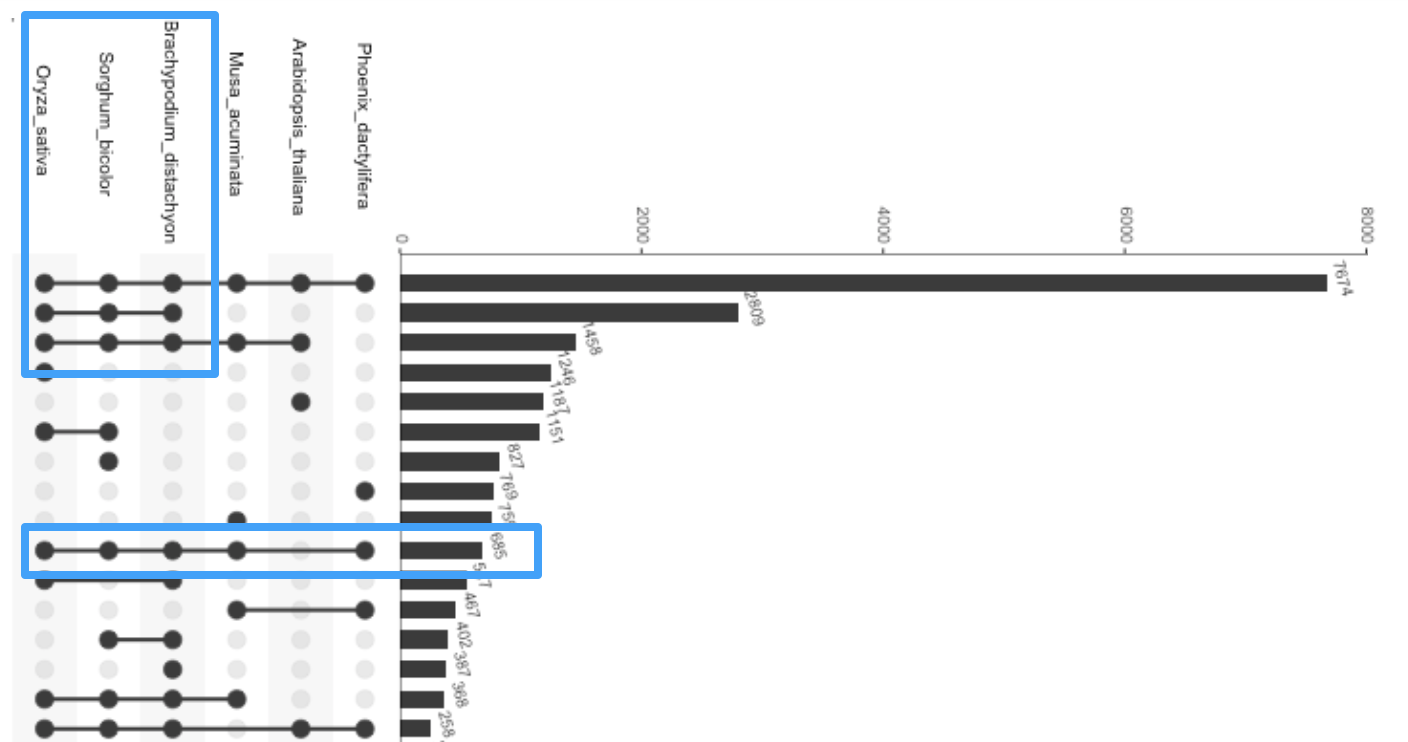 Such an analysis is almost impossible with a Venn diagram!